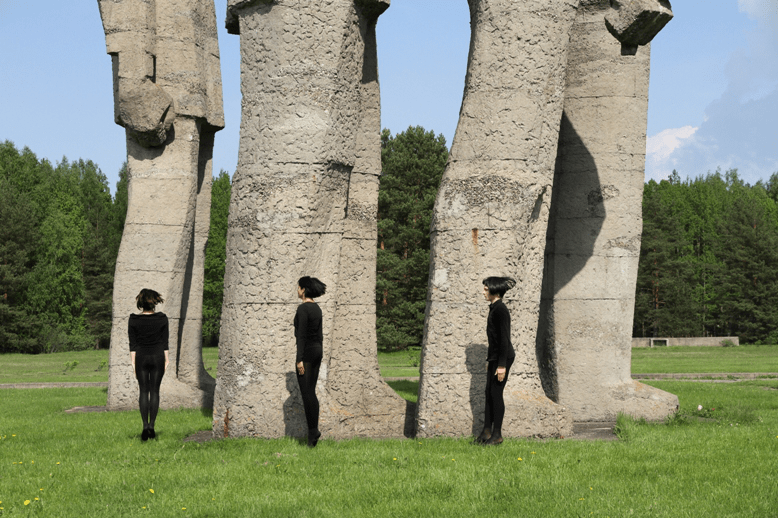 On Tuesday, 1 June at 19:00 everyone is invited to attend lecture / artist’s presentation “Mesmeric Monument” by German born British artist Liane Lang (1978). Liane Lang will be talking about her project “Mesmeric Monument”, a video installation created during a four week stay in Riga. She will be discussing the context of this project within her practise, its conceptual and formal concerns and her experiences of realising the work in Riga.  The artist’s chosen themes and artworks will be commented by Simon Rees, a curator at the Contemporary Art Centre (CAC), Vilnius, Lithuania. The lecture is supported by airline airBaltic.

The work of Liane Lang, ranges from photography to film, from kinetic objects to installation, all the while questioning the status of the object as an instrument of power and knowledge. This conjunction of instrumentality and ruin is nowhere more palpable than in Lang’s treatment of figurative sculpture

– itself taken as artefact and cultural form, imbued with special powers: terror or tradition, fetish or taboo.

Liane Lang lives and works in London. She was educated at Goldsmiths College and the Royal Academy graduating in 2006.  Her work has been exhibited extensively, in solo shows at Kunstverein Heidelberg, T1+2 Gallery in London and Offspace, Vienna and in group exhibitions including “Anticipation” at OneOneOne Gallery, “Artfutures” at Bloomberg Space and “Animations” at Kunstwerke, Berlin and PS1 New York. Her work is part of the collections of Deutsche Bank, The Royal Academy, Saatchi Gallery, Arts Council England, Ernst and Young and numerous private collections.

Simon Rees (1972) was born in New Zealand and educated in Australia and New Zealand. He is a curator at the Contemporary Art Centre (CAC), Vilnius and co-editor of the journal