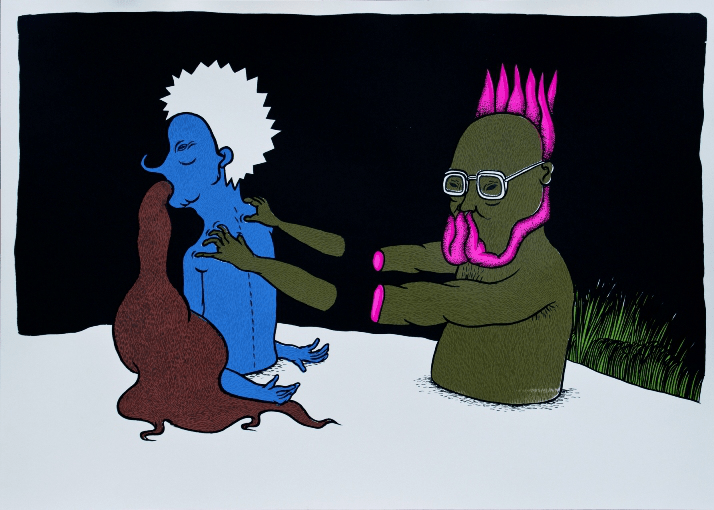 During Programme No. 14 from 7 until 29 August, 2010, exhibition “Three-Legged Case” by Latvian artist Maija Kurševa (1981) will be open to the public at the  Kim? / VKN gallery. This exhibition takes place in three different places simultaneously – at Kim? in Spīķeri, at 22 Bruņinieku Street and in Andrejsala.

“Three-Legged Case” is an exhibition that is discovered as a result of a romantic search. A random passer-by can also become a viewer of art, unexpectedly coming across sudden sounds, and following them. The three places are united by one hallucinogen audio story that reminds of life a little bit: “Tomato was wearing shorts, but still it was cold. A bunch of members of the local crochet circle came closer. Their eyes were gleaming. Each pulled out a bottle of ink, had a sip, spit it out onto moss and began to crochet a sleeping bag for thirty.” Two heroes of the story can be seen in the gateway of 22 Bruņinieku Street – they are “Self-made Trouble”. Two  frustrated puffballs have settled on the roof opposite the car park near Maija Kurševa’s studio in Andrejsala. One of their companions, separated from his company, is sitting in the Kim? / VKN gallery. 45 graphics produced this summer in silkscreen technique depicting all heroes of this absurd story will also be on show at the gallery.

Maija Kurševa has studied visual communication at the Art Academy of Latvia and the University of Arts Berlin (Universität der Kunst Berlin). The artist has been participating in exhibitions since 2004, and her works have been exhibited in the Baltic States, Belgium, France, Italy, Russia, Poland, Hungary and Germany. In May 2009, Kim? launched its public activities with the opening of the artist’s exhibition “The Spin”. Her works are in the collection of the nascent Latvian Museum of Contemporary Art.