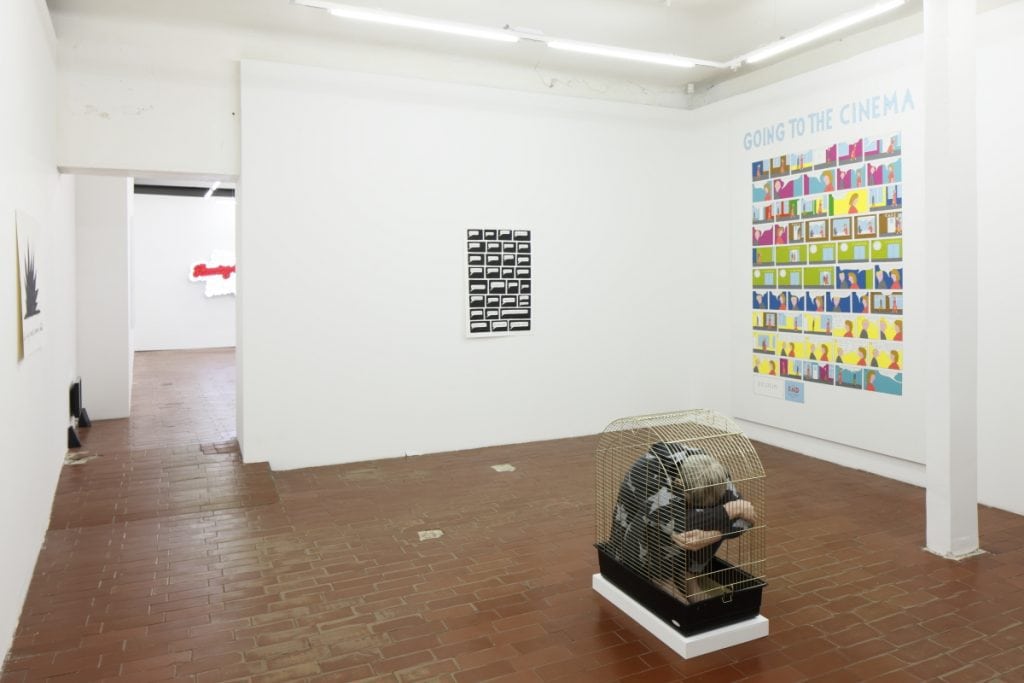 Marko Mäetamm’s art practice is very autobiographical, focusing on family life and society, exploring the grey area between what is private and publicthrough a variety of media such as photography, sculpture, animations, painting, and text.His work is humorous despite its sometimes dark content, with stories, very personal and intimate at first sight, that are in fact relevant to each of us as they touch on some very basic human instincts. Often what they depict is so close to our experience that we don’t recognise it, or sometimes not so comfortable to talk about. Curator of the exhibition Jonathan Watkins introduces the upcoming exhibition with following lines: “Estonian artist Marko Mäetamm specialises in human frailty. Internationally renowned for his observations on domesticity – the politics of family life (especially his own) – more recently in his work he has been making explicit reference to current affairs in the world at large. This exhibition embodies the angst we all feel as we swing wildly between everyday “little local difficulties” and the urgency of major international problems: climate change, North Korea, world trade, Ukraine, mass migration and discord in the Middle East. It is made worse by the pervasiveness of social media – epitomized by the smart/stupid tweeting of Donald Trump – keeping us on red alert at all times. True words are spoken in jest. Mäetamm thus brings his wonderfully dry sense of humor to bear on both global awfulness and seeming triviality, encouraging us to consider more closely what it is that motivates our behavior. Why are we so self-destructive? Can the religious fanaticism of the suicide bomber – “more in love with death than life” – be too easily read as a symptom of the kind of low self-esteem and feelings of powerlessness that hang out in countless teenagers’ bedrooms? Are we any more than mammals with an especially selfish gene? The combination of paintings, drawings, videos and sculptures comprising this exhibition places emphasis on such questions.”

Marko Mäetamm (b. 1965, Estonia) lives and works in Tallinn, Estonia. He studied printmakingart at the Estonian Academy of Arts, where he received his B.A. in 1993 and his M.A. In 1995. His work has been exhibited at such international venues as Gallery Platan, Budapest, Hungary (2001); la Biennale di Venezia, Italy (2003); Wäinö Aalto Museum, Turku, Finland (2009); Dorsky Gallery Curatorial Programs, New York City (2009); NADA Art Fair, Miami, Florida (2012); Gallery Iragui, Moscow, Russia (2014); the IKON Gallery, UK (2014)and many other places. Mäetamm has received numerous awards such as the Kristjan Raud Annual Award, Estonia (2000), the Baltic Assembly Prize for the Arts (2009), and the Annual Award of the Cultural Endowment of Estonia (2011). He was given the Estonian State Decoration, Order of the White Star, V Class in 2008, and in 2003 and 2007 represented Estonia at the Venice Biennial.

Jonathan Watkins(b. 1957) has been Director of Ikon Gallery since 1999.  Previously he worked for a number of years in London, as Curator of the Serpentine Gallery (1995-1997) and Director of Chisenhale Gallery (1990-1995). He has curated a number of large international exhibitions including the Biennale of Sydney (1998), Tate Triennial (2003), Shanghai Biennale (2006), Sharjah Biennial (2007), Negotiations (Today Art Museum, Beijing 2010) and the Guangzhou Triennial (2012). He was nominated as one of the top 100 Global Thinkers by Foreign Policy Magazine for his Iraqi Pavilion at the Venice Biennale 2013.


Exhibition is supported by Bank M2M Europe and is organized together with Temnikova & Kasela Gallery.