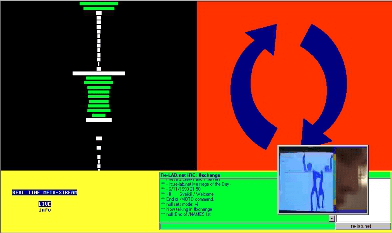 Images 1 of 1
WE ARE ON THE NET / net.art.lv. Works from RIXC server archive

The net.art.lv exhibition WE ARE ON THE NET for the first time has gathered and exhibited the early internet art works created by nowadays well known Latvian artists. The exhibition took place from November 5 till December 19 at Kim? / RIXC gallery. The exhibited art works are a part of the Latvian Electronic Arts Archive developed by RIXC with the support of  Ministry of Culture.

The Latvian Electronic Arts Archive is developed on a base of the content of RIXC.ORG (former re-lab.net) server that has hosted and maintained these early net.art projects since 1997. Exhibition NET.ART.LV displays a part of the collected and reconstructed art works created between the mid 1990s until the beginning of the 21st century. “Reconstruction” in net.art means adjusting earlier artworks to contemporary technological standards, while maintaining their visual appearance and restoring their functionality.

Background:
“Nineties. We are on the net – we are the net.”
The Internet developed rapidly in the mid 1990s providing not only new technical possibilities for creating artworks but also facilitating new forms of self-expression and established preconditions for creation of conceptually new space. Virtuality and immateriality of the electronic world, first and foremost inspired and united artists for whom it was not so important to produce things, but rather to make connections.
With an idea of free flowing concepts, collaboratively created content, art plus communication, and free floating locations the electronic arts laboratory E-Lab (now RIXC) and its server re-lab.net (rixc.org), were established in Riga, Latvia, in 1996. The most active artists, DJs and musicians, poets and other creative-minded people from younger generation at that time, gathered around E-Lab interested to explore the new medium – the Internet. Along projects produced by E-Lab, since 1997 re-lab.net/rixc.org server also hosts net.art works and creative net projects produced by other Latvian artists.
In a way new media works have realised the old avant-gardist vision of immateriality. Nevertheless, the Internet has most probably made it even harder to store these works if compared to contemporary art installations or video art. One of the main challenges is the rapid development of digital technologies and thus accordingly – ageing of previous technologies which endanger existence and maintenance of electronic art works in longer periods of time.

Furthermore, net.art is often created in collective experiments considering the process of creation as the most important part and giving little attention to the result. Therefore this exhibition poses challenges on how to display the process of creation or happening as well as the social context of archived art works and how to transform online art works into exhibition format.

Organised by RIXC, the Centre for New Media Culture in cooperation with Kim?