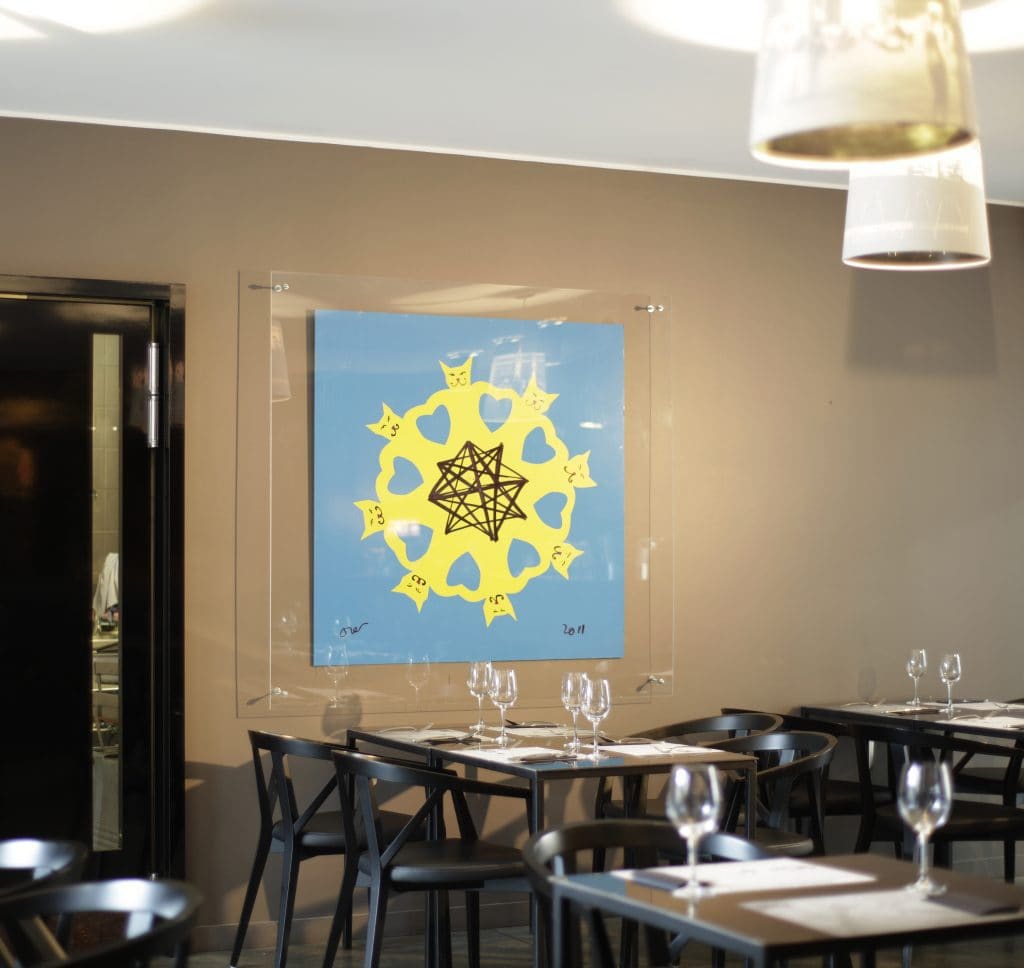 the new works are about the same as the old ones

“This Object Zero is a result of a ‘purified’ creative act – by forming it, the authors have not used any physical strength and the precondition of its emergence was the wish of the authors. And what emerged? – nothing. Object Zero is ‘nothing’ in the true meaning of this word, yet at the same time it can be viewed and is exhibited on the wall just like its neighbour – the traditional painting. It is just as motionless as the wall it hangs on, yet it continuously changes in time, for the space projected through the object is changing. There is an infinite number of different points, from which Object Zero can be viewed, but these are divided into two groups – Exposition No 1 and Exposition No 2, which in their turn do not at all disrupt the integrity of the object. It is spatial and at the same time it is located in the plane. It is fresh, unique and unrepeatable, but at the same time traditional and fully, entirely fits within the long disappearing avant-garde frames. It is inconspicuous, yet its observer realizes that all of this exhibition is only a frame of this object”, Timur Novikov and Ivan Sotnikov, October 12, 1982.

This episode of The Case in the Cafe was created in collaboration with the curator Odrija Fišere.

Ever since the 70s, the creative activities of Oleg Kotelnikov (Олег Котельников, born in 1958) have been closely tied with the underground culture of St Petersburg/Leningrad – the New Academy of Fine Arts (Новая Академия Изящных Искусств) and the group New Artists established in 1982 by the artist Timur Novikov («Новые художники»), as well as expressions of independent cinema and music. The activities of Oleg Kotelnikov in painting, cinematography, animation and poetry both then and now are united by witty commentary that reacts to the events of the time.

The cooperation of the art critic and artist Andrey Hlobistin (Андрей Хлобыстин, born in 1961) with the group New Artists dates back to 1986. He has developed numerous exhibitions, actions and published an array of manifests and samizdats both as an independent curator and by acting in tandem with Timur Novikov. Andrey Hlobistin has been the founder of various contemporary art organizations – the Leningrad Club of Art Critics (Ленинградский Клуб Искусствоведов; 1985), Institute of Contemporary Art History (Институт Истории Современного Искусства; 1999), the Contemporary Art Museum of the New Academy of Fine Arts (Музей Современного Искусства при НАИИ; 2002).

The artist and actress Irena Kuksenaite (Ирена Куксенайте, born in 1964) is a bright personality of independent culture of St. Petersburg, whose creative activities are linked to visual arts and cinema, as well as to participation in numerous activities of the New Academy of Fine Arts. A meaningful fact is the magazine «Кабинет» published in 1991 together with people sharing the same views, exploring the relationships of science, technology and contemporary art. Since 2007 Irena Kuksenaite has been the head and curator of the St. Petersburg cultural centre Loft Project ETAGI gallery Formula.