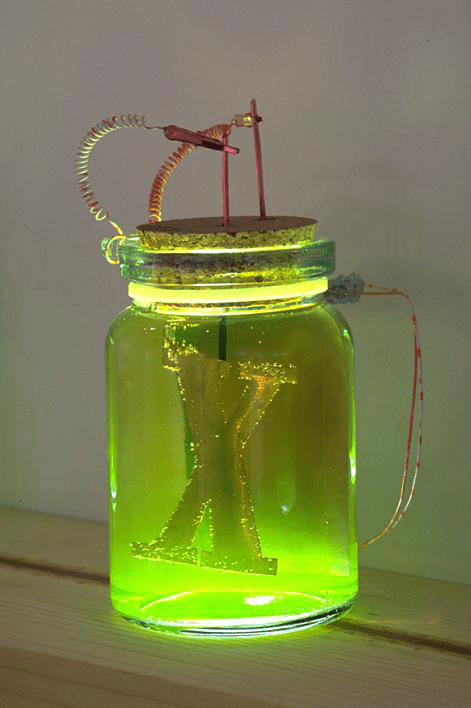 During Programme No. 10, 17 April until 9 May, 2010, exhibition “The Messenger” by American artists Paul DeMarinis at the Kim? / RIXC Gallery. The exhibition is part of the American culture month “Made in the USA” programme and is supported by the Embassy of the US in Latvia and airBaltic.

In the installation “The Messenger” email messages sent from around the world are received by a computer and spelled out, one letter at a time over three fanciful telegraph receivers. The central receiver, a circular array of talking chamber-pots, speaks out the letters in twenty six different voices. Another telegraph receiver consists of 26 dancing skeletons. Each wears a tiny poncho emblazoned with a letter of the alphabet. When each letter of a message is activated, the skeleton jumps, producing a dance macabre as the email messages roll off the internet. The third telegraphic receiver is a line of 26 antique glass jars, each filled with an electrolyte and holding a pair of metal electrodes, one of them shaped like a letter of the alphabet. The electrical currents cause the electrodes to change from shiny metallic to black alternately and to produce hydrogen bubbles. Nowhere does the system possess any memory or understanding of the messages displayed. Unless the signals are observed, written down and interpreted, the installation is the final meaningless terminus for messages that have travelled around the world and died. That the phenomenon of the lost or meaningless message has become so frequent an experience in our daily lives is due in no small part to our increasing reliance on electricity as our dominant medium of communication.

Paul DeMarinis has been working as an electronic media artist since 1971 and has created numerous performance works, sound and computer installations, interactive electronic inventions and public art in South America, Europe, Australia and Asia. Currently DeMarinis is an Assisted Professor at Stanford University, US.