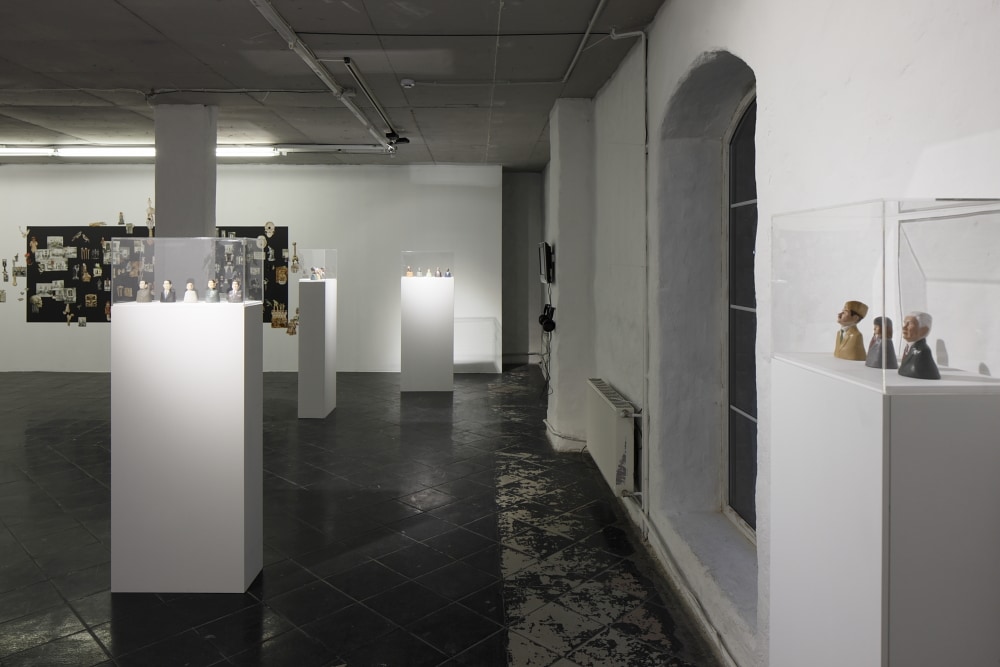 These exhibitions are made possible in part by the Trust for Mutual Understanding.

Focusing on storytelling, character development, and the act of listening in Rachel Mason’s practice, this exhibition features selections from earlier bodies of work and debut a new series of collages on paper.

Best known for figurative sculpture and complex performances that incorporate original songs, Mason often elaborates on historical documents and current events to render factual narratives intimate and subjective. Her work expresses a desire to recognize radically different viewpoints and engage with conflicts that are typically experienced from a mediated distance. In this way, the artist mobilizes listening as an empathic and political action. A selection from Mason’s Ambassadors series is shown, in which the artist presents herself as a mediator positioned between sculptural portraits of political leaders involved in the wars of her lifetime. In a companion performance to the series, Mason embodies the various figures that she depicts, including Fidel Castro, Boris Yeltzin, and Dzhokhar Dudaev.

A grouping of Mason’s Starseed figures are also on display. These small-scale sculptures pay tribute to powerful women that the artist considers influential to her own work—some of whom, such as Joan Jonas, Mason has apprenticed with. Positioning herself as listener as well as storyteller, Mason encourages the continuation of a specific lineage associated with her narratives. The show’s title refers not only to the artist and audience as listeners, but also to the animistic quality of her objects. The Starseeds reappear in videos such as Doll Audience, in which a doll-sized Mason performs to her heroine figurines. Building upon her earlier bodies of works, Mason’s collages, shown in this exhibition for the first time internationally, represent a nascent trajectory into more fantastical character studies.

Rachel Mason was born in Los Angeles, California in 1978 and is currently based in New York. She received her B.A. from the University of California, Los Angeles and her M.F.A. in Sculpture from Yale University. Mason has performed and exhibited her work nationally and internationally at venues including the Queens Museum, New York; the School of the Art Institute in Chicago, IL; the Whitney Museum of American Art, New York; the Henry Art Gallery, Seattle; Sculpture Center, New York; The Clocktower Gallery, New York; Kunsthalle Zurich, Switzerland; the Hessel Museum of Art at Bard College, Annandale-on-Hudson, NY; the Swiss Institute, New York; Human Resources, Los Angeles, CA; The New Museum, New York; the Museum of Contemporary Art Detroit, MI; James Gallery at the CUNY Graduate Center, New York; the Park Avenue Armory, New York; and EMPAC Center for Performance, Troy, New York. Mason has shared stages with Josephine Foster, Prince Rama, Diane Cluck, Sharon Von Etten, Phosphorescent, Light Asylum, and Ed Askew among other renowned musicians, and she has been the subject of articles in publications including The New York Times, Artforum, The Los Angeles Times, Art in America, and Flash Art. Mason is represented by envoy enterprises, NYC.

Sara Greenberger Rafferty’s practice encompasses photography, video, sculptural installations and ephemeral works that are often inspired by the tropes of comedy, performance and media culture, as well as by her ongoing interest in notions of authorship, identity, and public versus private representations of “self.” This exhibition, Repair – a title that is suggestive both of an attempt to fix something that is damaged or broken, and the act of moving, or retiring, to another space—features existing work alongside new works specially created on site.

The world of comedy and its devices are frequently present in Rafferty’s work, not so much as a subject in itself, but more as a formal strategy. Interested in those moments in which individuals reveal an inner self that is typically not manifested, Rafferty exposes the inherent tension between a projected self-assurance and inner fallibility, traits that she ascribes as much to artists as to comedians. In Mono, first shown at the 2014 Whitney Biennial in New York, Rafferty cast actor Susie Sokol to perform a script made from actual monologues of three late-night comedy hosts: Johnny Carson, David Letterman, and Joan Rivers. By taking away the trappings that accompany late night comedy programs—such as stage sets, music, and the audience itself—Rafferty reduces these personalities to a more human scale. The comedians’ actions and phrases become amplified and isolated through Sokol’s gendered performance, which at once captures but makes vulnerable, the trademark behaviors of their comedic power.

Much of Rafferty’s recent work has taken the form of photographic imagery on clear acetate, the surfaces of which she often ‘attacks’ by puncturing with screws or altering through the use of poured and scraped paints. These visceral images hover between realism and abstraction, presence and absence. At Kim? Rafferty has created a series of new works, including printed and ‘screwed’ acetate pieces and a subtle site-specific installation incorporating visible wall-repair.

Sara Greenberger Rafferty has exhibited widely since 2001, including solo exhibitions at The Kitchen, New York; MoMA PS1, New York; Eli Marsh Gallery at Amherst College, Massachusetts; The Suburban, Illinois; and a commissioned sculpture for the Public Art Fund. In 2014, she participated in the Whitney Biennial; the Hammer Biennial; and had a solo exhibition at Fourteen30 Contemporary Art, Portland, Oregon. In 2015, her work will be part of exhibitions at the Museum of Contemporary Art, San Diego and the Atlanta Contemporary Art Center in Georgia. Rafferty has participated in group shows at venues such as the Aspen Art Museum, Colorado; Neuberger Museum of Art, Purchase, New York; Gagosian Gallery, New York; and the Jewish Museum, New York. Her work is also included in the collections of the Museum of Modern Art and Whitney Museum of American Art, among others. Rafferty received her MFA from Columbia University in 2005 and lives and works in Brooklyn, New York.