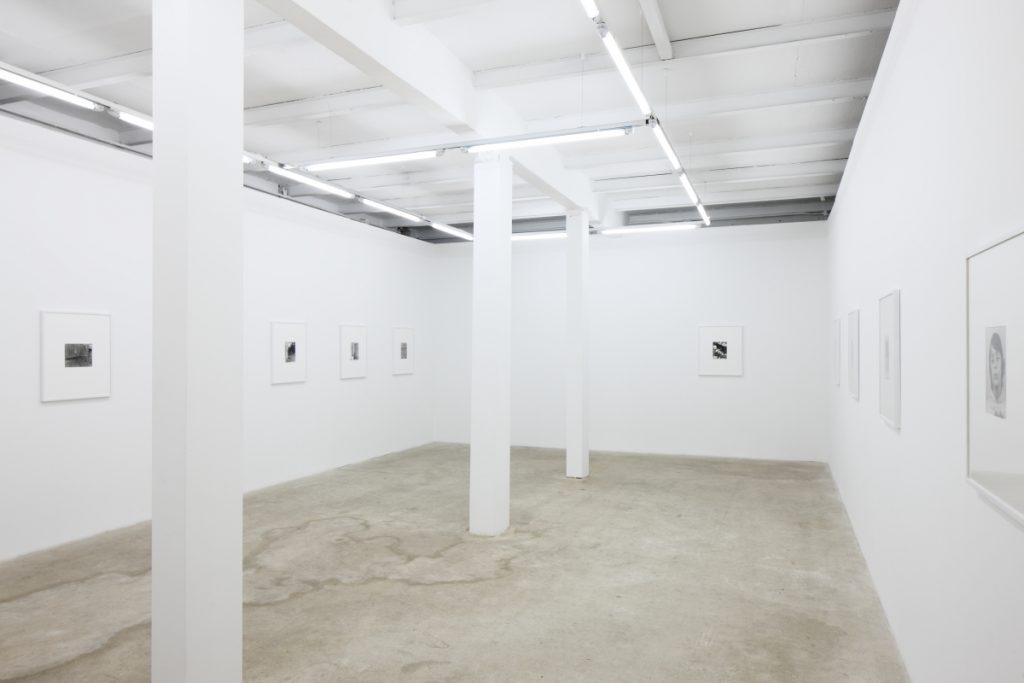 Listing the literal content of the images on display is a tempting way to begin to write about a photographic exhibition. In the case of Ilya Lipkin’s current outing at Kim? these would be: graffiti on the walls of buildings in the borough of Purvciems, Riga; the closely cropped face of a young boy; and a shopping bag from the supermarket chain Rimi. Indeed, it is appealing to think through photography in general as an aggregate of technically reproduced and reproducible subjects; an ever expanding list of proper nouns. If it can be named, logic dictates, it can be tallied, arranged and cataloged. However, parallel to this managerial tendency in photographic discourse, one may begin to think of the subject and it’s representation as filtered through cultural techniques and attitudes.Prone to historical contingency and requiring a certain kind of literacy to recognize, attitudes are elusive.They areal so subjective, which is perhaps why they are often conflated with style.

As both an artist and a commercial photographer, Ilya Lipkin employs a variety of photographic techniques in relation to his subject matter; in this case, the analog process of shooting and printing in black and white. Alongside the framed images on display at Kim? the viewer has access to a copy of a 1974 article from the lifestyle magazine Esquire. The article, written by Norman Mailer, was accompanied by photographs bearing a striking resemblance to Lipkin’s, shot by Jon Naar. Together, the text and images chronicle the rise of 1970’s New York graffiti culture, and were later expanded into a book titled The Faith of Graffiti. The similarity of the subjects and their framing, chosen by Naar and Lipkinsome forty years apart, only serves to underscore the marked attitudinal difference between the two sets of images.As with language, inflection affects meaning, and Lipkin’s images do not chronicle the emergence of a subculture, but rather it’s atavistic imitation on the walls of Soviet-era buildings in 2017.

Since the appearance of the Esquire article, the lineage of graffiti that had its roots in New York subway writing has been comfortably recuperated into the fold of mainstream consumer culture. What was formerly considered “edgy” lettering is these days all too legible as wallpaper at a local McDonalds or the offices of a Facebook data collection center. However, something still remains to be said for it’s primal act – i.e. the choosing of an alias, the refusal of the original proper noun. When the internal acknowledgement of yourself as a subject in the world lies in responding to the call of your name by a police officer or a bank teller, perhaps this refusal is worth thinking about.If capitalism dictates what is perceived as real, pushing us to accept images as substitutes for the things they depict, questioning photographic reality on it’s own terms becomes the photographers refusal.

Ilya Lipkin (b. 1983, Riga) is an artist based in Berlin. He is a graduate of the Whitney Independent Study Program and his work has been exhibited at Autocenter, Hamburger Bahnhof Museum fur Gegenwart, Lars Friedrich and Silberkuppe in Berlin, as well as at Nousmoules in Vienna, among other venues. He is represented by Lars Friedrich gallery.