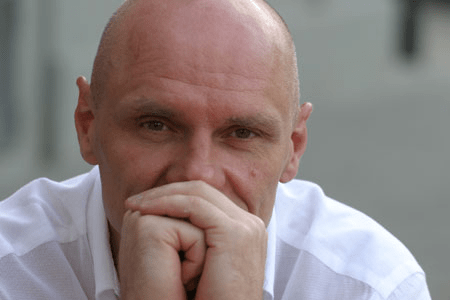 On Tuesday, 9 February at 19:00 psychotherapist Viesturs Rudzītis was giving a microlecture / microdiscussion “Sensuality and Mythology”. The lecture took place on the top floor of Kim? abode.

In his lecture, Viesturs Rudzītis discused sensuality and sexuality. The sexuality of “Saint” and “sold”. Latvian sense of sexuality – fear, shame, denial, sublimation. The role of the family triangle – Mother, Child, Father. The dynamics of the triangle and its connection to three Ancient Greek mythological epochs – chthonic, Titanic and Olympic. Latvian mythology and its chthonic – titanic boundries. The main couples of the matriarchate culture: Mother – Son, Daughter – Father and Witch – Devil.

The lecture is part of the experimental workshop “Cinema Commune U35: Sensuality” which is organized by the short film festival 2ANNAS and takes place from 11 till 14 February. The aim of the experimental workshop is to review the interpretations of sensuality in cinema, to promote sensuality and intimacy in the works of young Latvian cinema and video artists, to explore Latvian sense of sexuality and to discover the sensual motifs in Latvian folklore and mythology.