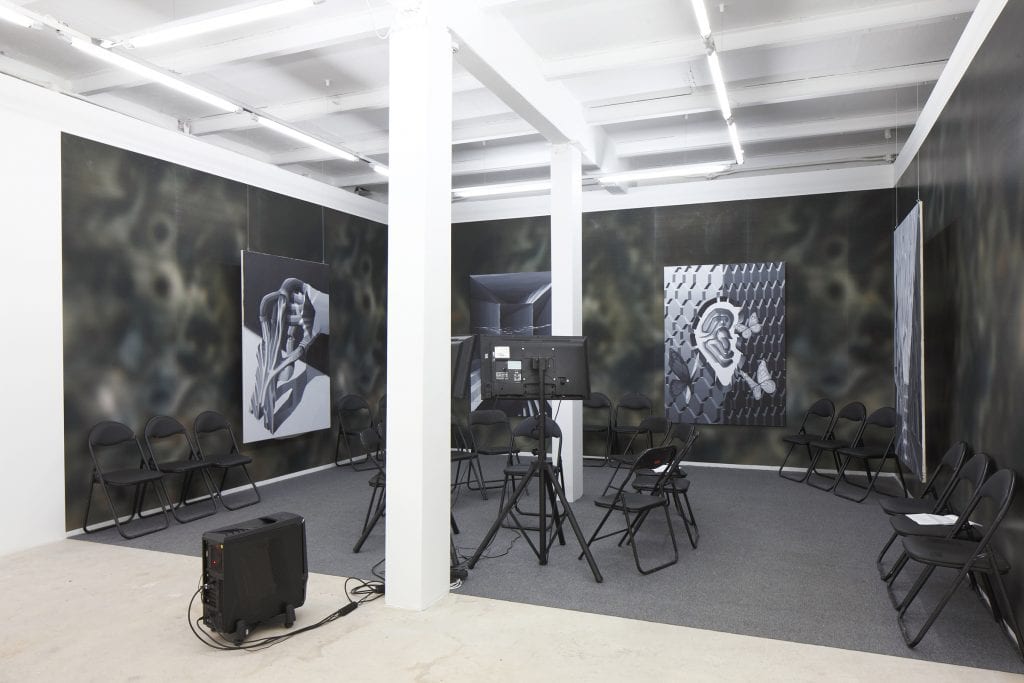 You see the designed space at the back, with its clear, delimited arrangement. Something similar to a waiting room where chairs line the surrounding walls, only here they enclose a different arrangement – two screens on free-standing mounts facing a single chair. An order that feels a bit too serious and slightly ominous, inapt in its density. Take a seat – research is being conducted and you are now part of it.

The screens display digital creatures crawling through labyrinths in an open eld. It isn’t a looped fragment of an animated video but a programmed self-playing game that runs innitely. In its rst version, which was shown in Rotterdam a couple of months ago, these were cockroaches – an odd choice though grounded on imagery so cleanly technologized that it barely touches on potential abhorrence or phobias. Here, we see humans, which might lead us to a Kafkaesque metamorphosis … But this is a fast association, as everything gets more obscure: there are two perspectives of observation that run simultaneously, distributed between the screens – the one of the moving creature itself, the other from an unknown top-down observer. Such a divided presentation suggests a totality which is once again vigorously doubled – the seated person observing this digital environment could potentially be observed by someone now absent but ctionally designated by the order of empty chairs. Together it generates the feeling that there is always a witness of all types of processes in which one is involved. The installation looks like a synergetic whole, but also as an absurd mechanism, which only accelerates perception to some kind of entirely enigmatic level. This plays on recent discussions connecting technological development to esoteric, occult beliefs, and pre-modern systems of knowledge. But there is also another mystical trait to encounter in the otherwise algorithmic behaviour of the creatures, which is based on chance, feedback and repetition of a sequence of actions. While watching their meandering movement we project onto them a kind of purpose. It stops being a simple pedestrian movement and gradually becomes a trajectory, it even turns into a direction, a dance with a certain lyricism, and also beauty. It is a choreography, whose rules unravel as time goes by. Now, we are the ones confronted with these rules. At some point, Viktor was telling me about spending time in hospitals decorated with paintings hanging on the walls of rooms and waiting areas. Mostly commissioned, they are mainly gurative works with motifs that are meant to be enjoyable, soothing, even if they look completely misplaced. Within this installation there are also several black and white paintings. They superimpose a spatial order that reproduces the structure of a labyrinth, through their tunnelling illusionism and dreamlike ambience. There is an ear populated with butteries; a hand whose fingers merge into an organic monolith; a grid that constructs the space, and seems to belong to the very logic of things. Even if this imagery clearly demarcates a history of painting as being a window to the outside world, it only adds to an environment where nothing external seems to exist. This is the hermetic order of the scientic argument; what painting brings in is a vocabulary of symbols where the outside world is completely dismantled. If the black and white colour scheme is one of a binary digital language, then the space created is one based on loss of control; of uncertainty… which brings us back to Viktor’s base line.

A curator and writer living between Frankfurt/Main and Soa

the Ministry of Culture of the Republic of Latvia, the State Culture Capital Foundation of Latvia, Riga City Council