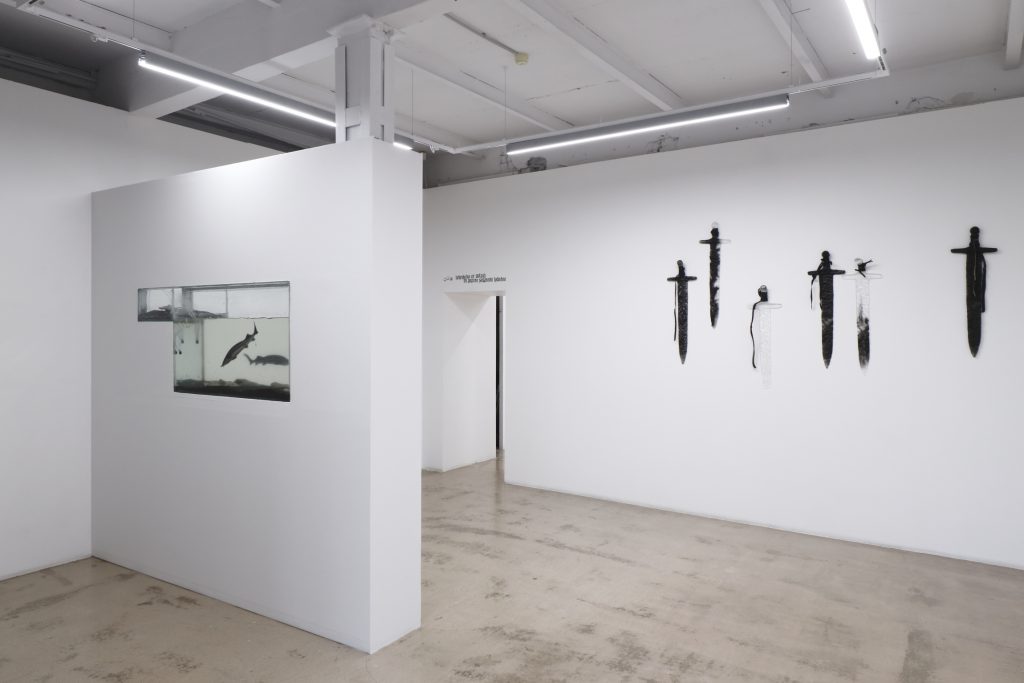 Where My Cards Lay, a new solo exhibition-installation by Ieva Kraule-Kūna (b. 1987), deals with the aftermath of the fall of the Soviet Union in the newly minted post-Soviet Baltics. An arrangement of culturo-historical and sociopolitical testimonies, the exhibition is based on the artist’s memories, emotions, and experiences growing up in 1990s’ Rīga. It addresses things experienced, misunderstood and imagined. In line with the title pronouncement, the exhibition embodies the conjuncture of fortuity, fate and circumstance that dictated events in the “unconquered” decade of the 1990s, a time that, as the artist argues, is still here.

The final decade of the past century was a time of radical change in the post-Soviet Baltics – a political, social and economic vertigo accompanied by national elation, on the one hand, and fear, insecurity and confusion on the other. This was a period of intense change, in which processes of renewal and self-redefinition took place across all aspects of life, including economic, interpersonal, and cultural. At the same time, a novel state-concept was introduced to Baltic life, ushering a strange parallel world into being—including a cultural avoidance of top-down policy and its conventions. Everything had to be learned and consumed anew, as the space-time of culture was radically reorganizing itself into newly revised chaos, with no map or means of navigation along the way. Instead, a simultaneity, changeability, and murkiness (“fogginess”) introduced by the postmodern era prevailed, evidenced by new state and protection rackets, Ponzi schemes, bribes and forgeries, raves and banquets, easy money and violence, a rise of different spiritual practices and ideologies, shadow economies, and growing rifts between local Latvian and Russian speakers.

While elsewhere (in the West) the fall of the Berlin Wall (1989) and the Soviet Union (1990) brought about the formation of a “global” art world accompanied by blurring national boundaries, an evening out of the center and the periphery, as well as the rise of the internet as a means of global cultural ex-change, Rīga was mostly preoccupied with the task of making things “normal” by making up for lost time. Instead of making a social turn, – to become a situation or a process – the new living conditions were played out in 1990s’ Rīga. These were based on a situation in which, against the backdrop of limited theoretical, financial and infrastructural organization, existence (of art) itself was called into question.

With this tactic, Ieva Kraule-Kūna transfers these circumstances to the present day, making use of art practice to tell of the era’s duality, the permanent clash between the relativity of time and things, and the impressions its influence has left. Each of the four Kim? exhibition rooms has assumed the meaning of a tarot card, respectively: Six of Swords (reversed): Magical Thinking after the vacuum of belief; Three of Coins: at the supermarket with only acorn and a paperclip in the pocket; Five of Clubs: the violent lust for life; and Four of Cups: the realities of everyday life, all of which simultaneously depict an image of Ieva Kraule-Kūna’s subjective experience, further revealing the reality of 1990s’ Rīga. Despite being deeply personal, these images conjure up symbolic sign-sets of the collective unconscious. Similar to memory formation, they are not—and in fact, cannot be—perfectly replicative, instead storing eccentric details, which often dissipate and transmute in time, transformed by subsequent experiences to better fit the individual life narrative of one’s own making.

These “stage designs” of memory work are evocative of the 1990s’, which their authors Ēriks Božis (b. 1969), Andris Breže (b. 1958), Ieva Iltnere (b. 1957), Sarmīte Māliņa (b. 1960) and Ojārs Pētersons (b. 1956) have reinterpreted upon Ieva Kraule-Kūna’s request, looking back at their creative output and experiences of the era with today’s eyes and “erasures”, or corrections through the lens of today. Together, these testimonies from the past are tied to contemporary items, giving visitors the chance to experience and lose themselves among archival materials and video collages, sculptural objects and installations, paintings and ready-mades, sidestepping the breach between the documentative and the fictitious/imagined, between authorship and (self)-citation.

A hybrid-conference-readings is held as part of the exhibition, with participating theorists, critics and curators expanding upon the project’s topics in felicitously named presentations: “Why Iveta?”, (Helēna Demakova), Order from Chaos: Taming Freedom and Civilizing Selves in the 1990s (Dace Dzenovska), Fear of Feminism in Latvia (Jana Kukaine), Adidas made me hardcore (Anastasiia Federova), Waiting for Wild Capitalism: Latvian Art and the Post-Socialist Condition in the 1990s (Santa Hirša), and A Bellyful of Valuta, A City Full of ‘Chanel’: Buying Art in Post-Soviet, Proto-Capitalist Riga (Mark Allen Svede).

At the conclusion of the show, Where My Cards Lay, a bilingual catalogue, will be published, collecting Ieva Kraule-Kūna’s exhibition materials, essays presented in the readings, and a broad collection of visual images. The presentation event will be held in the aesthetic of social gatherings in the nineties, with artist Daria Melnikova (b. 1984) setting up a banquet at the exhibition premises.

Ieva Kraule-Kūna (1987) was born in Riga. She has MA in Fine Arts from Sandberg Instituut in Amsterdam. Artist mostly produces sculptural objects using various materials (ceramics, stone, metal, etc.), accompanying them with short stories, where absurd adventures of fictive characters alternate with cockeyed interpretations of historical facts. In her works, Ieva Kraule-Kūna references fetishism, history, artisanship and aesthetics of the Soviet era while tracing origins of both personal and collective aesthetic codes. Her most significant solo and duo exhibitions include: “Artist Crisis Center II – Tact Gear” together with Elīna Vītola ( 2020, PAKT, Amsterdam), “Hot Babas” (2019, Latvian National Museum of Art exhibition hall Arsenāls Radošā Darbnīca, Riga), “α: Deceived Deceivers” (2017, Kim? Contemporary Art Centre, Riga), The person you are trying to reach is not available together with Aidan Koch (2016, Hester, New York), Qu’est-ce que ça peut faire tout ça together with Kaspars Groševs (2015, Shanaynay, Paris), Nobody Dances Like That Anymore (2014, Gallery 427, Riga), …if all you told was turned to gold (2014, Vita Kuben gallery, Umeå), 11 out of 10 (2013, kim? Contemporary Art Center, Riga). Most significant group exhibitions: Paris Internationale (2015, Paris), XII Baltic Triennial (2015, CAC, Vilnius), Le fragole del Baltico (2015, CareOf, Milan), Lily’s Pool (2015, Art In General, New York), Vortex (2014, Project Space Garage, Moscow). She is also the recipient of the Kim? Residency Award 2017 and, in 2017, spent three months at the Gasworks residency in London. She is a finalist of the Purvītis Prize 2021. She is a co-founder of Gallery 427 in Riga and co-curated its program from 2014 to 2016, and co-headed LOW gallery from 2020 to 2022.